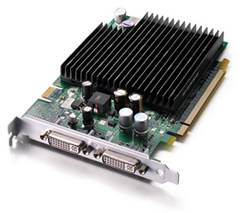 The best way to achieve a stable and silent multi-screen computer which can survive a dying graphics card is to use multiple, passively cooled, dual monitor graphics cards.

I want to talk about graphics cards requirements for multi-screen PCs, trading computers and gaming systems.

I recently had a discussion with a potential customer (let’s call him John) about graphics cards, John believed that you needed a really powerful graphics card to be able to handle 4 or more monitors, his logic was that more monitors means more graphics processing power was required.

I completely understand John’s line of thinking and can see why he may assume this, on the face of it that does seem logical.

The problem is that he is wrong.

When building a multi-screen capable PC what is required more than anything else are monitor outputs, you can only connect as many screens as you have monitor outputs available.

How Many Monitors Do Graphics Cards Support?

Traditionally graphics cards only ever had 1 monitor output on them, supporting just one screen. Now a days you are hard pressed to find one that doesn’t have at least two or three, usually a mix of HDMI,  DVI and VGA outputs to cater for different types of monitors.

You can also purchase some gaming graphics cards which offer 4 or even 6 monitor outputs on 1 card.

ATI were the first ones to really do this with their Eyefinity range however nVidia also now offer some higher end cards with larger numbers of monitor outputs on them.

It’s worth pointing out that many graphics cards may carry 3 or 4 monitor ports but that doesn't automatically mean that they can support a screen on each port at the same time. Often connecting up too many screens gives you either a black / blank screen or a cloned copy of one of the other monitors which is not what we want.

So, if we want to build a 4 monitor capable PC then the simplest thing to do would be to use a graphics card with 4 monitor outputs on it right?

Well, yes that would be the ‘easiest’ option, but we all know that the easy option is often not the best option don’t we?

Generally speaking, quad monitor capable graphics cards tend to be underpowered, you are asking 1 card to power four screens after all. In certain scenarios they are unavoidable but on the whole performance is often worse than it could be.

What do I mean when I say performance is worse? Well, an example could be that dragging or resizing a program from screen to screen might not be instant, i.e. you may see some ‘lag’ as the screen catches up with what you are doing.

There are some newer workstation class quad / six monitor graphics cards which do offer better performance levels than traditional quad monitor cards have however they are expensive and usually need a lot of adapters to be able to support DVI or HDMI screens which adds to the cost quite a bit.

In some scenarios though they can allow for a much higher number of screens to be supported than you could manage with dual monitor cards.

Over the past few years some high end gaming graphics cards have been produced with can support 3 or more screens, they have been designed specifically for gaming use (imagine playing a racing car simulation across 3 screens).

These gaming cards have a lot more power than the traditional quad monitor graphics cards but they also have some drawbacks.

They tend to be physically bigger cards which can affect case airflow and can also cause issues if you are trying to fit 2 or more of them into a system build.

Due to the fact that they are optimised to play the latest 3D games, which demands a lot of processing power, they have powerful chips on them which draw a lot of amps from the system power supply which usually means an increase in power supply size is required.

You often find that these higher end gaming graphics cards have a real mix of monitor outputs on them, 1 x DVI, 1 x HDMI and 2 x Mini DisplayPort connectors is not untypical. All of this means that you are likely going to need to use a number of adapters to connect up to your screens, adapters which add to the cost and are points of failure.

One other point to consider, which is often overlooked is component failures. If your PC relies on one graphics card to support all your screens, and if this graphics card fails, then essentially your machine is ‘dead’ until the card is replaced.

If you had more than 1 graphics card though and one died your machine would probably still be usable which I’m sure might be helpful to some of you out there?

This option is what we use and here is why.

Now, we specifically choose the nVidia GT 730 as our primary graphics card for the following reasons:

Another benefit of this build method is simple really, if a card fails you generally still have 1 or more remaining which will grant you access to your computer, this can be crucial for some of our customers.

In terms of performance though, surely your system will be faster with a more powerful graphics card?

Up to a point yes, graphics processing power could be a system performance bottleneck, but this really depends on what you are doing on the computer.

If we forget about gaming needs (or CAD / video rendering requirements which are a discipline all of their own!) then what a graphics card needs to do is display the output from your PC. Its job is to interpret the data from your PC and ‘draw’ it to your monitors.

I can tell you that a £900 gaming graphics card will not draw an excel document or a chart to your monitor any faster than a (seemingly) lower powered GT 730 card. The reason why not is because the graphics ‘horsepower’ level needed to draw 2D images onto a screen in a seemingly instantaneous fashion was smashed through years ago.

Once you get over this level of processing power then any gains offered in desktop 2D graphics are negligible at best.

A £900 gaming graphics card costs this much because it can do a much better job of rendering a 3D game than lower powered cards, they are designed and optimised specifically for this. A £200 gaming graphics card will not be as good at this type of game rendering as the £900 one but will most likely be better than a GT 730, the thing to keep in mind though is that the £200 card and the £900 card offer no performance benefit to the non-gaming user over the GT 730 either.

So is the GT 730 rubbish at displaying games? No, it’s still a decent gaming graphics card, a few years ago it would have been classed as pretty high end, it’s just not as powerful as a £900 gaming card and that’s reflected in the price.

Hopefully you can see why we use the graphics cards that we do and why this ultimately benefits you and leads to a more stable and silent computer which is still more than capable of performing to your exact needs.

Sticking an expensive gaming graphics card into a PC is a way to achieve a multi-screen PC but it has many drawbacks for little or no real world benefit and it certainly won’t lead to a silent, reliable, properly cooled computer which has redundancy built in to it.

Read enough? Why not checkout our full range of multi-screen computers!