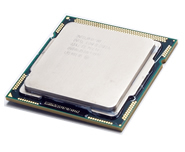 Your CPU or processor is the heart of your new computer, it is the main chip which carries out all instructions and calculations needed to run your programs.

Generally speaking the faster a processor runs the faster it can carry out instructions so all other things being equal a faster speed (GHz) means a faster computer.

Some processors have a Turbo speed which they can run at for short bursts of extra processing power when required, we list CPU's by base speed and include Turbo speeds if a chip is capable of it.

In addition to a CPU's processing speed, another important measure is the number of CPU cores and threads. A core can process one set of instructions at a time, so a 4 core CPU can process 4 things simultaneously, this makes it better at multi-tasking.

Many CPU's now have technology called HyperThreading, this allows your software to essentially send 2 instructions to each CPU core simultaneously giving even greater multi-tasking performance. Ther number of instructions that can be processed simultaneously is generally represented as the number of threads available.

We list the cores and threads for you to see, so 6C - 12T, means that the chip has 6 CPU cores and HyperThreading giving you 12 threads.

Intel's latest mainstream CPUs are the 10th Generation chips. You can work out which generation a processor is from as the first number in it's designation is the generation.